I got this idea from Marshal Zeringue, who keeps both the Page 99 Test blog and the Page 69 Test blog.

I’ve also blogged about the Page 99 Test website (unaffiliated with the above two blogs), but I’ve never actually done the test before.

The Giver by Lois Lowry 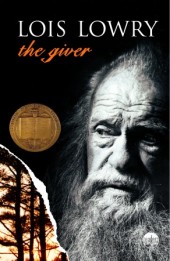 Excerpts from the 99th page…

“He found that he was often angry, now: irrationally angry at his groupmates, that they were satisfied with their lives which had none of the vibrance his own was taking on.”

“He put his hands on Asher’s shoulders, and concentrated on the red of the petals, trying to hold it as long as he could, and trying at the same time to transmit the awareness of red to his friend.”

“One evening he came home from his training weighted with new knowledge. The Giver had chosen a startling and disturbing memory that day.”

If you haven’t read The Giver, (and I highly suggest that you do) it’s a YA/middle grade novel about a futuristic community without color, pain, or disorder of any kind. One person in the community is chosen to hold the collective memories of the past – memories that are both pleasurable and painful. Twelve-year-old Jonas is chosen to be the next keeper of these memories and as he receives them from the Giver, Jonas’s innocence slowly erodes as he realizes that a life of safety and security within the community is not a real or fulfilling life at all.

I’d say these lines from page 99 definitely represent the main conflict of the book – Jonas’s realization that the memories he receives are causing a rift between his community and himself.

Here’s another of my favorite books, Needful Things by Stephen King.

Excerpts from the 69th page…

“…Wilma Jerzyck called her up one night and told her that if Nettie didn’t shut the dog up, she’d come over and cut his throat?”

“Nettie’s got problems, all right,” Polly said, “but her reaction to Mr. Gaunt was nothing short of amazing. It really was awfully sweet.”

Needful Things is another King novel taking place in the fictional town of Castle Rock, Maine. Charming Leland Gaunt sets up shop in the small town, but his shop is like no other – it’s got literally anything you could ever want, but for a hefty price. Mr. Gaunt makes deals with the citizens of Castle Rock, plays them against each other, stirs up dormant animosity between them, and creates chaos and mayhem in the town.

My paperback copy of the book is an enormous 736 pages, but the 69th page still manages to portray the spirit of the book – how Mr. Gaunt easily charms the citizens of the town, then sets them against their worst enemies and fears.

Still, if a writer is really good, he or she will be able to weave the book’s central conflict throughout each page, making every page an accurate representation of the rest of the book.

Published or unpublished writers can upload the 99th page of their manuscript and have it critiqued. Readers (or publishers and literary agents) can read the page and determine

1. Whether or not they would want to turn the page and keep reading,
2. How likely they would be the buy the book,
3. What thoughts or critiques they would give to the author of that page.

Seems like a lot of weight to place on just one page, but that’s the beauty of the test. Reading a random page from a book is a good indication of how the rest of the book will be. It’s better than trying to determine a book’s worth from its cover art or the blurbs on the back and inside covers.

I would definitely make use of this website after I get my writing revised and deem it good enough to submit. As a matter of fact, I turned to page 99 of a novel I wrote where I had numbered the pages (usually I type each chapter into a separate Word document) with the intent of putting it up on the site, but my page 99 was one of those strange ones with only two lines on the page. Meh.

Anyway – take a bit of time to review a few page 99s and let me know what you think of the site. Would you submit your page 99s? Thanks for reading! 🙂