Nope, that’s not my tattoo. That’s not my boyfriend’s or brother’s or best friend’s tattoo. It’s some random guy’s tattoo that I found on Google Images. I’m going to rant about it.

If God wanted us to have tattoos, he surely would have had us be born with them. Maybe they would be reflections of our personalities would eventually turn out. As a matter of fact, God did give us tattoos. They’re called birth marks and beauty marks.

I don’t particularly see getting a tattoo as important. Why do people get them? Is it to express individuality? As a tribute to a loved one? To have an awesome design inked beneath their skin for the world to see?

What I really don’t get are the people who get tattooed all over their bodies. There’s this guy who I’ve seen in Wal-Mart on numerous occasions. His entire head is covered with tattoos. I wonder what he does for a living – probably a tattoo artist himself.

I guess it’s mostly just a matter of preference.

And then, there are piercings. Take, for instance: 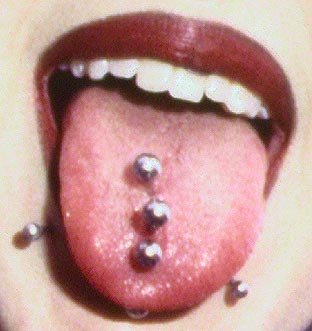 Again, it’s another random image I found from Google. Why would you want a tongue piercing? Wouldn’t it interfere with eating? I guess if you really wanted to be sexy, it would be nice.

A guy I went to college with got a tongue piercing for the sole purpose of showing it off to girls in order to get one of them to make out with him. Why do people get tongue or lip piercings? To look menacing or sexy?

Nearly every female I knew in college had a navel piercing, which I don’t particularly understand at all. Are they attractive? Did God intend for us to get them? I don’t think so – or else we would have been born with them.

There are many more types of piercings and tattoos that I don’t want to get into right now.

If you read this, tell me. What’s your opinion on tattoos and piercings? If you have one, where is it and why did you get it? Does it effect what people think of you for the better or for the worse? If you want a tattoo or piercing, why? What would it symbolize for you?

2 thoughts on “Tattoos and Piercings”

Thank you for visiting and welcome to my blog! I update occasionally on Tuesdays, Thursdays, and Saturdays.

I Endorse These Blogs